NETPRO RE-ACQUIRES WHAT MAY BE CONSIDERED THE GREATEST
SERENA WILLIAMS ROOKIE CARD IN EXISTENCE! 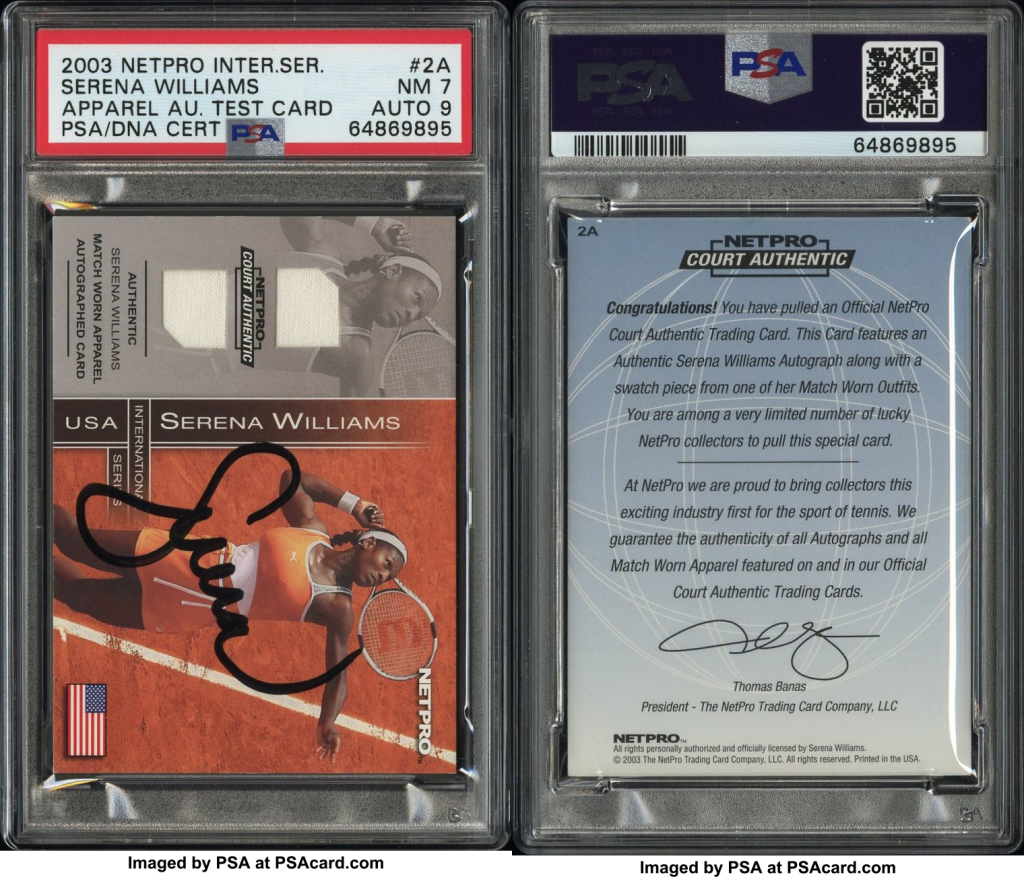 LONGWOOD – NetPro Trading Cards, LLC has re-acquired an extremely rare Serena Williams rookie card after it was tucked away in an Indiana man’s collection for nearly 20 years.

NETPRO is the most recognized tennis card brand worldwide and was the first company to release officially licensed trading cards featuring the world’s best tennis players beginning in 1991. In 2003, NETPRO provided another industry first for the sport when it released autographs and match-worn apparel cards of 11 different stars – one of them being the great Serena Williams.

The 2003 NETPRO International Series Serena Williams #2A rookie cards remain one of the most sought after collectibles in the hobby. The card was limited to only 100 sequentially serial-numbered examples that were randomly inserted into packs. The chance of pulling the Serena Williams was one in every 2400 packs, (equivalent to 10 cases of product).

Prior to the formal signing of each serial-numbered card, the athlete would ‘practice’ their signature on the preferred location on one or two unnumbered versions of the same card. These cards were either discarded or sold to private collectors. The Serena Williams card, however, was mistakenly inserted into the 2003 International Series packs – making it truly a one-of-a-kind collectible of the future Hall of Famer.

“We are beyond ecstatic to locate this extremely rare Serena Williams Match-Worn Apparel Autograph Rookie Card. This practice signature card was not supposed to be included in packs, but somehow was lumped into the production at the time with the other 100 serial-numbered cards. We’ve known which collectors have had the Roger Federer and the Anna Kournikova cards all these years, but never could locate the Serena, as it was the only one inserted into packs at the time. The chance of pulling this particular card was once in 240,000 packs! Due to the unique circumstances surrounding this one-of-a-kind rookie card, we strongly believe that this could be the first female sports card to approach the mid six-figures in value.”, said Kris Vigue, President of Netpro Trading Cards. “Collectors are chasing athletes who are considered to be The Greatest of All-Time, and there is little doubt that Serena Williams exemplifies G.O.A.T. status.”

The unique card possesses a bold on-card autograph which has been graded a MINT 9 by PSA, the sports card industry leader in grading authentication.

This card will be showcased at NetProCards.com and will be made available shortly through one of the major auction houses.

Look for more exciting news to be released by NetPro Trading Cards, LLC in the near future.